Technology Services will implement an activity-based expiration policy for Office 365 groups. Security groups and distribution groups set-up in local Active Directory will not be affected by this policy. Any active groups will be automatically renewed. Groups without user activity will expire and be deleted unless the group owner chooses to renew the group. Warning messages will be sent to group owners starting at 30 days prior to the group being deleted.

The expiration policy will set a group lifetime of 180 days and require user activity during the lifetime or the group will be marked for deletion. Office 365 groups will be monitored by a Microsoft 365 service for user-based activity. User-based activities include the following actions:
If none of these activities is performed during the group lifetime and the owner doesn't respond to the warning messages, then the group will expire. After group expiration, the group is deleted as well as any associated Team, Planner, and SharePoint site that was created alone with that group.

When an Office 365 group is marked for deletion, there are multiple warnings sent to the group owner. These warnings are sent via email, usually from Microsoft Online Services Team <msonlineservicesteam@microsoftonline.com>.
Each of these warnings will be give the group owner the option to renew the Office 365group if it is still needed. If the group is no longer needed the group can be manually deleted or the warnings can simply be ignored. 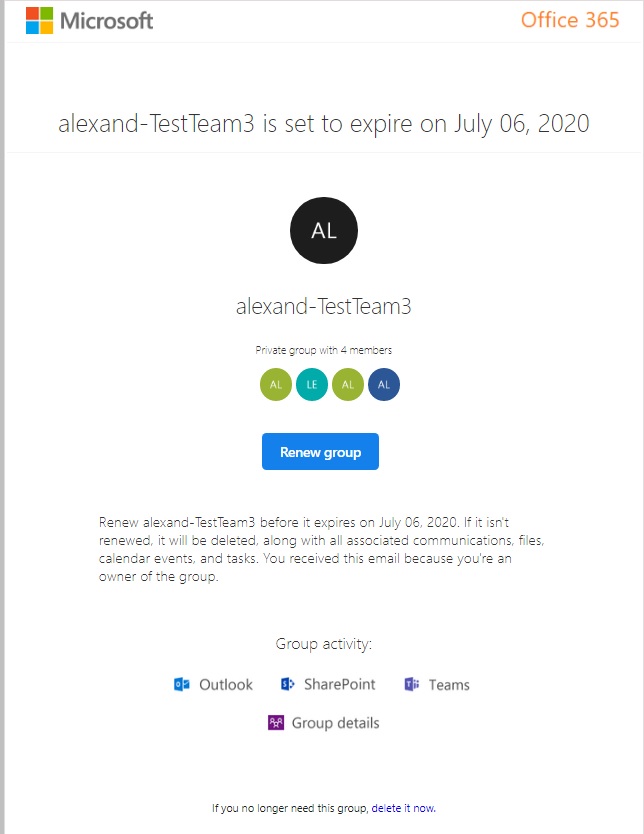 What are Office 365 Groups

Who are Group Owners

Where to Get Help

For assistance with Office 365 groups, please contact the support team at office365@illinois.edu. We can answer questions about the expiration policy, recover deleted groups, and update group owners.