To help students identify which Canvas groups are associated with a particular course, we recommend using a naming convention that is specific to your course.

On the student end, Groups can be accessed in the Global Navigation Menu (please note: this will only appear as an option if the student is enrolled in a group). When the Groups item is selected, a tray will open that lists all groups a student belongs to for all of their current courses. If the group name is something generic (like "Group 1" or "Project Group 1"), students cannot determine which course a group is associated with. As an example, the image below shows that this user belongs to 4 groups: Group 15, Project Group 1, Project Group 2, and Weekly Discussion Group 3. 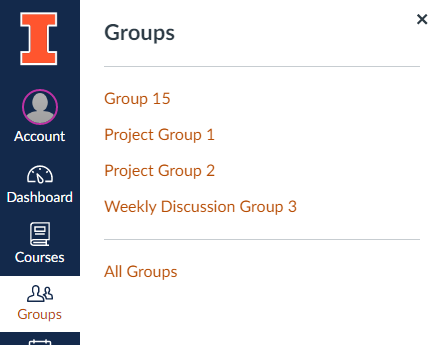 A better naming convention is to use your course's rubric (such as "ANTH 101 Group 1") or an abbreviation of the course title ("Intro to Anth - Group 1") to distinguish between the different groups. In the example below, the user belongs to 4 groups with courses clearly identified: ANTH 101 Discussion Group 1, ANTH 101 Project Group 1, ANTH 103 Project Group 2, and BADM 102 FA22 Group 15. 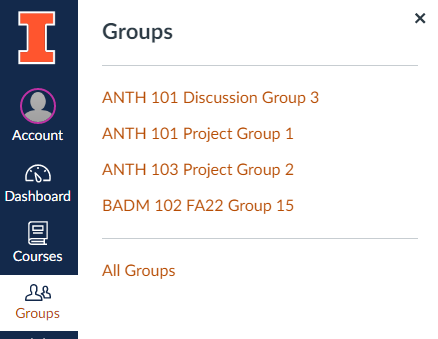 The example group names listed below follow the recommended naming convention (but feel free to customize to fit your needs):