This page describes how the new Adobe Creative Cloud (CC) 2019 licensing and activations work at the university.

How it used to be

For comparison, CC 2018 and earlier versions were licensed at the university such that:

How it is now

Starting with CC 2019:
For staff and faculty to activate their free access to the CC apps, they must request WebStore to grant their Adobe Enterprise ID access to the apps using this WebStore offer.
Options for students to access CC apps are:

What this means for you

Until CC 2018 licensing expires in January 2020, functionality on computers that still have CC 2018 or older apps installed will not change; see above. After the license expires, installations of Adobe apps that are CC 2018 or older will either cease to function, or usage of these will be considered against the terms of the university's license agreement with Adobe.
If a computer has CC 2019 apps installed you can expect to see sign-in prompts when opening CC apps for the first time on that computer. If you've signed in to activate CC apps on two computers already, signing into a third will prompt you to de-activate one of the previously activated computers. Computers that have been activated will not require any further sign-ins, unless you deactivate them or manually sign out afterward.

When opening a CC 2019 app for the first time on a given computer, you will see the following prompt. Click Sign In Now. 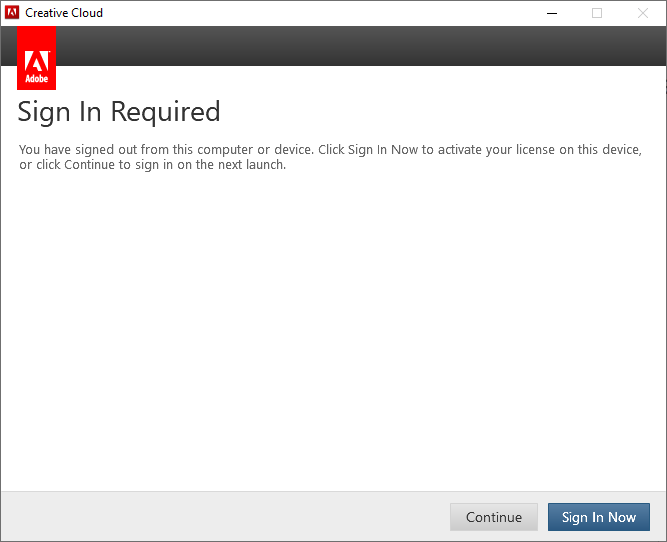 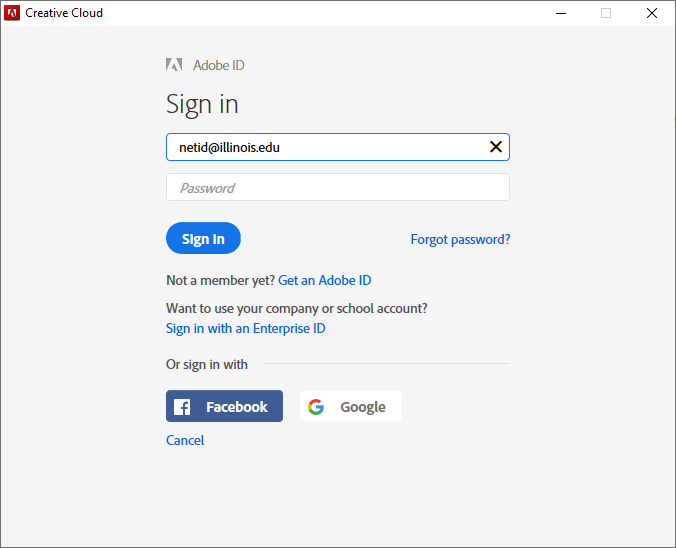 You will be prompted to choose whether to sign in with a (personal) Adobe ID, or a (company/school) Enterprise ID. Click on Enterprise ID. 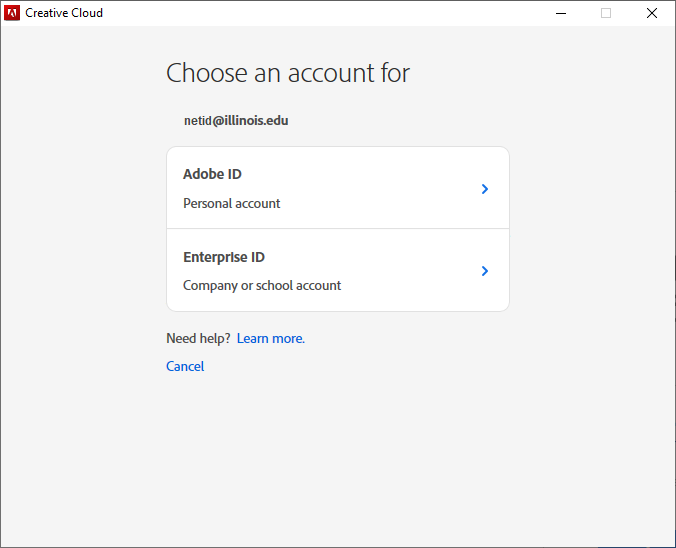 You will be redirected to the familiar official Illinois Login page. Enter your NetID and password. You may be prompted to follow the 2FA process to complete the login. 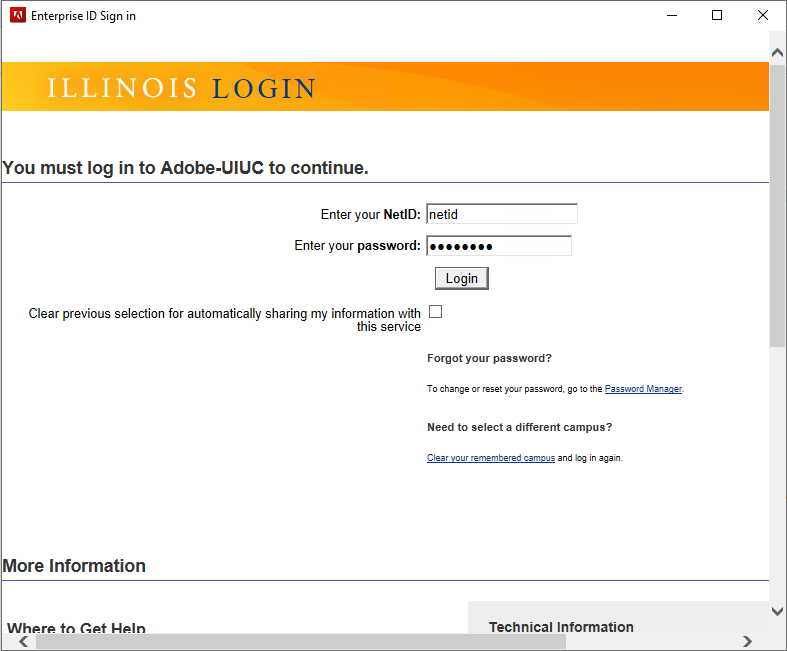 After a moment the login and activation process will complete and you should be presented with the CC app you initially tried to open. If you were already signed into two other computers you will be prompted to deactivate one of them. See below.

If you open a CC 2019 app on an un-activated computer while two other computers are already activated, you will be presented with a window requiring you to deactivate one of the previously-activated computers. Note: this message will only appear when running a CC app. The CC desktop app itself does not check for activation. 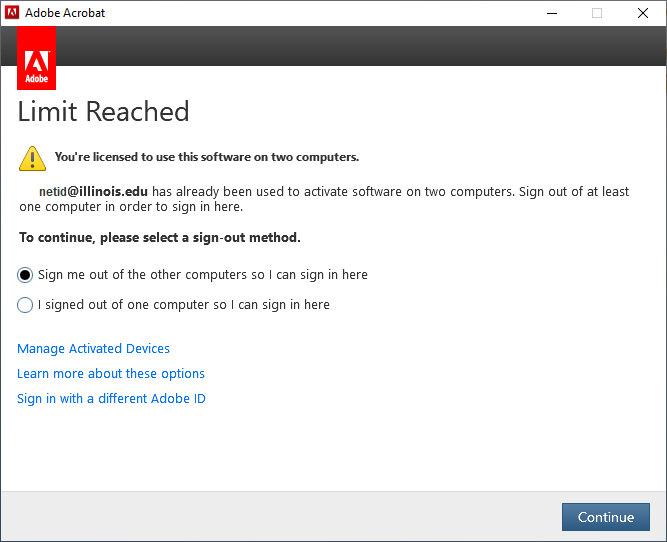 Select Sign me out of the other computers... and click Continue. After a moment, the process will complete and you should be presented with the CC app you initially tried to open. You will automatically be signed out of the computer you least recently activated.

Regretfully, in the Illinois environment, you are not able to selectively de-activate specific computers, nor directly manage your activations from a web control panel like you would with Office 365 (despite the relevant link in the above screenshot). However you can preemptively sign out of the CC platform on any computer to free up an activation, as shown below.
Open the Adobe Creative Cloud app from your start menu. 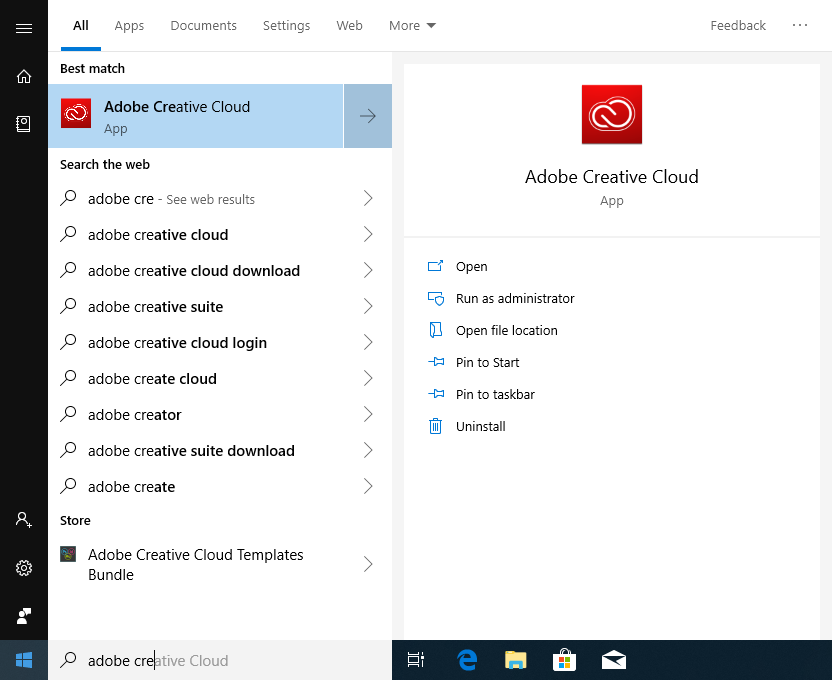 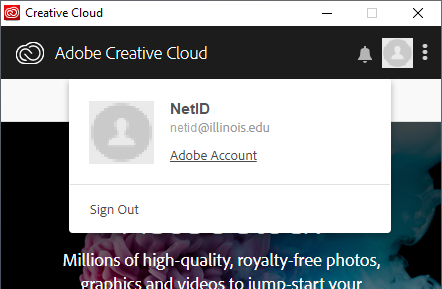 Faculty and staff that don't have an Adobe Enterprise ID can get one with this WebStore offer.
WebStore has some KB articles that may be useful:
Short URL for this page: https://go.illinois.edu/adobecc2019