Limitations: because this workflow relies on functionality built into Apple's macOS installers, it is only supported on Macs already running 10.13.4 or higher with an APFS-formatted hard drive, or on Macs running 10.14.0 or higher with either an APFS or an HFS-formatted drive. Additionally, it can only be used to install macOS 10.13.6 or higher, and will only work on Intel hardware, not Apple Silicon. Lastly, because Apple's installers can't be used to "roll back" to an older OS, this workflow is also subject to the same restriction. In other words, if you try running the 10.15 erase-and-install workflow on a Mac running 11 (Big Sur), it will fail. 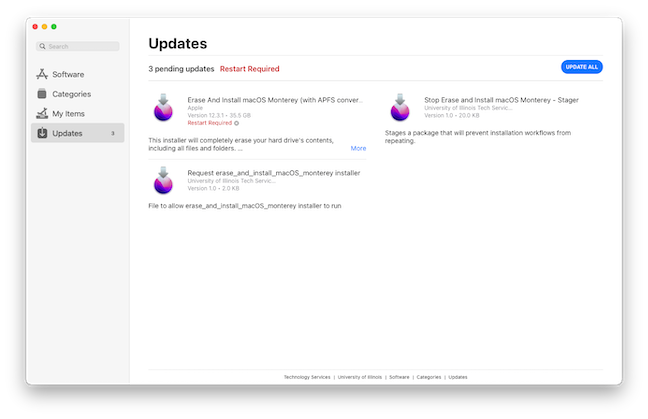 In response to stakeholder request, a modified version of the Big Sur and Catalina workflows have been created that will skip all Setup Assistant steps and boot directly to the login window: erase_and_install_macOS_big_sur_skip_setup_assistant and erase_and_install_macOS_catalina_skip_setup_assistant. Unless you have alternate methods for creating local admin accounts, do not use these workflows, as there will be no accounts created and therefore no way to log in.